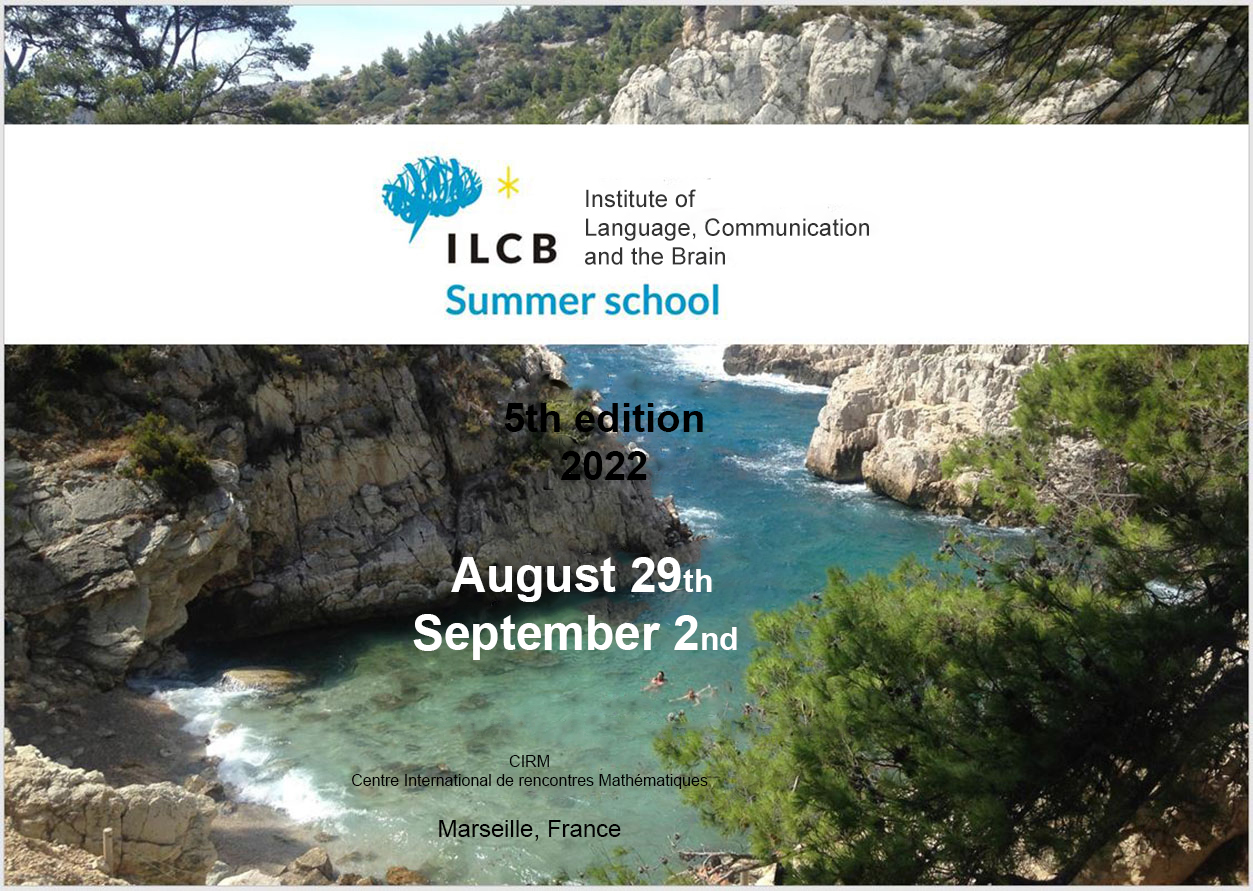 The 5th Edition of the ILCB Summer School offers Introductory and Advanced Classes in four core fields of Cognitive Science, reflecting the expertise of the Institute:

Keynotes and social events complete this week of immersion.

– Non-ILCB Members: The cost of the stay is to be paid directly to CIRM. Please contact CIRM to get a quote for your stay :

Planning of the CIRM (with room information)

In this course I will give a few key examples of brain language research in order to give you an idea what cognitive neuroscience models of language look like, how they generate questions and predictions, and finally how those predictions can be tested by relying on cognitive paradigms combined with neuroscientific techniques. In this manner, I will address a specific empirical question and brain language model on the topics of semantics, phonology and syntax, respectively.

Language is made of different components at different levels: sounds (or letters), words, groups, sentences, utterances (or texts). It is usually considered that human language relies on this ability to combine low-level units into larger ones in order to build meaning. Understanding how language works consists then in describing these different levels through their corresponding linguistic domains (phonetics, prosody, phonology, morphology, syntax, semantics) and to explain how do they interact. We propose in this course an overview of these domains and present the different theories explaining how meaning can be built from them.

Daniele Schön will give a lecture about the predictive brain : How do we perceive the world surrounding us? What is the role of memory? How many real worlds exist? To what extent our knowledge limits how we study brain functions? I will try to address these and other questions by adopting a musical view of brain functions.


This course proposes an introduction to human and non-human animal behavior in relation to language studies and the question of the phylogenetic origins of the language faculty. The course is organized in two parts. In the first part, Adrien Meguerditchian will make a brief historical overview of how behavior is assessed over times, from Aristotle to Darwin, then he will describe the concepts and methods proposed by the behaviorist paradigm, the biology of behavior and the contemporary cognitive ethology. During the second part, Marie Montant will address several questions raised by the comparison between human and non-human animals. Then she will describe the relationship between the complexity of behaviors and brain evolution, and how human behaviors are measured in cognitive paradigms.

This course introduces the basics of descriptive statistics, in particular, the concepts of population, variable, observation, as well as the representation of numerical data as tables and graphics, the measures of centrality and dispersion, and finally Exploratory Data Analysis. From real data examples, we will produce high quality graphics using the R software and the ggplot2 package. The last lecture focuses on the more advanced topic of describing the dynamics of functional connectivity from EEG traces.

In this course, we will see the basis of functional brain imaging from three different perspectives: functional magnetic resonance imaging (fMRI), electro and magnetoencephalography (EEG/MEG), and intracerebral EEG. Each modality provides a specific and unique way to measure the activity of our brain and all of them are complementary. We will briefly review their mechanisms and recording systems and provide an overview of the possible analysis that can be done. After the course, you will have the competences to decide the best modality to answer our scientific questions.

Prerequisite: Attentive attendance at the four previous segments of the course would be a plus.

Aphasia : implications of cognitive science for clinic and rehabilitation : Véronique Sabadell, orthophoniste et doctorante en sciences cognitive, Institut de Neurosciences des Systèmes et Laboratoire de Pyschologie cognitive
Aphasia is an alteration of language abilities following a brain lesion. It can have very diverse manifestations. Traditional classifications have attempted to define distinct syndromic entities, AMONG which Broca’s aphasia and Wernicke’s aphasia are the most frequently cited. Although widely used, particularly in clinical settings, these classifications are being challenged by advances in cognitive neuroscience and psychology. Language is now seen as a non-unitary, widely distributed function, in constant interaction with other cognitive functions such as sensory-motor integration, memory, and executive functions. I will present the implications of this updated perspective for language rehabilitation protocols.

In case of drug-résistant epilepsy the surgery procedure consisting in the resection of the “seizure generator” is considered as the treatment of choice. However, this procedure may induce Language deficits, particularly after left temporal surgery. In this context, counseling at the individual level patients about the risks and benefits of surgery can be challenging. The functional exploration of the language network is by consequent crucial.

Motor Speech Disorders refer to a set of signs affecting the control and production of speech consequent to neurological impairment. They are characterized by an approach which dichotomizes motor speech disorders in two modalities: apraxia of speech and dysarthria, which can be distinguished on at least two fundamental points: (1) dysarthria is the consequence of motor dysfunctions also involving the limbs (rigidity, akinesia, ataxia, dystonia, etc.) and of which a specific pathophysiology is determined; dysarthric disorders are constant, predictable, whereas this is not the case for patients suffering from apraxia of speech; (2) verbal dysfluency, marked in apraxic patients, is not characteristic of dysarthric speech. After presenting the classification and pathophysiology of dysarthrias associated with specific movement disorders, I will briefly introduce the relevance of targeting research on dysarthria, and mainly hypokinetic dysarthria in Parkinson’s disease, as a model for a better understanding of the involvement of cortico-basal ganglia-cortical pathways in speech motor control.

Basic notions of motor functional neurophysiology would be helpful, but it is not a pre-requisite for this introductory course.

Learning to read and dyslexia: from theory to intervention: Johannes Ziegler, Aix-Marseille Université and CNRS

How do children learn to read? How do deficits in various components of the reading network affect learning outcomes? How does remediating one or several components change reading performance? In this talk, I will quickly summarize what we know about how children learn to read. I will then present developmentally plausible model of reading acquisition. The model will be used to understand normal and impaired reading development (dyslexia). In particular, I will show that it is possible to simulate individual learning trajectories and intervention outcomes on the basis of three component skills: orthography, phonology, and vocabulary. The work advocates a multi-factorial approach of understanding reading that has practical implications for dyslexia and intervention.

This course will provide both the theoretical background and skills to apply linear and logistic mixed models in R/RStudio. Mixed models are some of the most popular analytical approaches in the human sciences, and the R programming language is widely used in academia. Topics include (but are not limited to) loading and assessing the integrity of your data set (missing values, outliers, etc.), distributional analysis and visualisation, mathematical understanding and requirements for an appropriate mixed model, data transformations and handling categorical variables, the specification of fixed and random effects, hierarchical implementations, model application, model checks and optimization, model selection, stepwise approaches/feature elimination, and if time permits, Bayesian implementations of the approach.


This course will provide an overview of how sounds are processed by the human brain. The auditory system is the main sense to communicate between one another. Sounds are temporal in essence, and can be as diverse as voice, music, or environmental sounds. All of those carry selective cues that can be analyzed by the human brain, to share linguistic, semantic or emotional information. This course will lead you from the sound dimensions themselves to how cognitively relevant information is extracted and mapped in the cortex.

In the most commonly accepted cognitivist conception of human language, the body and biology are not considered as relevant variables: the language faculty results from a series of operations performed on symbolic, abstract information. This idea has been reinforced by the rise of artificial intelligence and the adoption by the scientific community of the brain-computer metaphor.

We will first discuss the cognitivist heritage, before addressing the limits and corollary damages generated by this approach. We will then discuss various biological driving forces and mechanisms (from genetics, morphology, paleoanthropology, ethology, neurophysiology and neuroimaging) that might be involved in the building of human language.

Prerequisites: None. Mental-travelling abilities across disciplines would be a plus.

In this course, I will explain the role of graph theory in neurosciences. No strong mathematical background in needed in graph theory, we will learn the main concepts during the first part of the course. Some basic knowledge on statistics may be useful : classical tests such as students t-test, multivariate approaches such as multiple comparisons corrections, support vector machines to make classification, reduction dimension approaches such as PCA. The two first courses will be illustrated during practical using python. We will use the two packages: networkx and scikit-learn. For the last course, I will propose a tutorial on graph signal
processing to link structure and function in the brain. For this I will use classical graph theory as it was introduced in the first course. Some basic notions of algebra may be need such as eigenvalues, eigenvectors.

This class will give an overview of the main approaches for modeling language with deep learning, from recurrent neural networks to transformers. Then, it will explore representation learning techniques for natural language processing, their promises, their limits, and why they are ubiquitous tools for language-related applications. A practical tutorial will complement this presentation by letting students implement in pytorch linguistic probes as a tool to better understand BERT representations. Suggested pre-requisites: fundamentals of machine learning and data science, python programming, experience with pytorch. This course is part of a continuity. A first class on Monday afternoon, August 30, followed by two more classes on September 1 and 2.

Prerequisites : Python programming, deep learning, experience with pytorch is a plus.