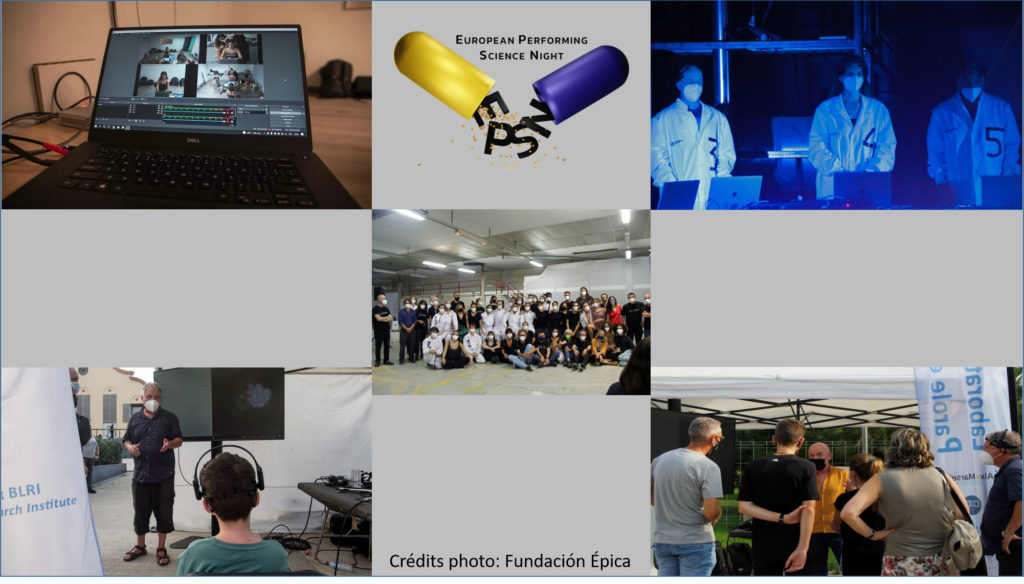 Four members of the ILCB – Clément François, Philippe Blache, Thierry Legou and Léonardo Lancia – were present in Badalona for the first European Performing Science Night (EPSN), organized within the framework of the European Researchers’ Night, a Marie Curie Slodowska Initiative. The EPSN project has been possible thanks to collaborations with the Épica foundation, La Fura dels baus and five other Catalan research institutes. Four doctoral students of the COBRA project – Emilia Kerr, Lena Marie Huttner, Salomé Antoine and Dorina de Jong – were also present to collect data (EEG hyperscanning & interaction) during the 2-week preparation workshop as well as to present their project during the European Performing Science Day.

Video and pictures of the first workshop on Flickr

Video and pictures of the second workshop in Flickr

The posterior part of the superior temporal gyrus (STG) has long been known to be a crucial hub for auditory and language processing, at the crossroad of the functionally defined ventral and dorsal pathways. Anatomical studies have shown that this “auditory cortex” is composed of several cytoarchitectonic areas whose limits do not consistently match macro-anatomic landmarks like gyral and sulcal borders. The only method to record and accurately distinguish neuronal activity from the different auditory sub-fields of primary auditory cortex, located in the tip of Heschl and deeply buried in the Sylvian fissure, is to use stereotaxically implanted depth electrodes (Stereo-EEG) for pre-surgical evaluation of patients with epilepsy. In this prospective, we focused on how anatomo-functional delineation in Heschl’s gyrus (HG), Planum Temporale (PT), the posterior part of the STG anterior to HG, the posterior superior temporal sulcus (STS), and the region at the parietal-temporal boundary commonly labeled “SPT” can be achieved using data from electrical cortical stimulation combined with electrophysiological recordings during listening to pure tones and syllables. We show the differences in functional roles between the primary and non-primary auditory areas, in the left and the right hemispheres. We discuss how these findings help understanding the auditory semiology of certain epileptic seizures and, more generally, the neural substrate of hemispheric specialization for language.

It is poorly known whether musical training is associated with improvements in general cognitive abilities, such as statistical learning (SL). In standard SL paradigms, musicians have shown better performances than nonmusicians. However, this advantage could be due to differences in auditory discrimination, in memory or truly in the ability to learn sequence statistics. Unfortunately, these different hypotheses make similar predictions in terms of expected results. To dissociate them, we developed a Bayesian model and recorded electroencephalography (EEG). Our results confirm that musicians perform approximately 15% better than nonmusicians at predicting items in auditory sequences that embed either low or high-order statistics. These higher performances are explained in the model by parameters governing the learning of high-order statistics and the selection stage noise. EEG recordings reveal a neural underpinning of the musician’s advantage: the P300 amplitude correlates with the surprise elicited by each item, and so, more strongly for musicians. Finally, early EEG components correlate with the surprise elicited by low-order statistics, as opposed to late EEG components that correlate with the surprise elicited by high-order statistics and this effect is stronger for musicians. Overall, our results demonstrate that musical expertise is associated with improved neural SL in the auditory domain. Significance statement It is poorly known whether musical training leads to improvements in general cognitive skills. One fundamental cognitive ability, SL, is thought to be enhanced in musicians, but previous studies have reported mixed results. This is because such musician’s advantage can embrace very different explanations, such as improvement in auditory discrimination or in memory. To solve this problem, we developed a Bayesian model and recorded EEG to dissociate these explanations. Our results reveal that musical expertise is truly associated with an improved ability to learn sequence statistics, especially high-order statistics. This advantage is reflected in the electroencephalographic recordings, where the P300 amplitude is more sensitive to surprising items in musicians than in nonmusicians.

When learning a new language, one must segment words from continuous speech and associate them with meanings. These complex processes can be boosted by attentional mechanisms triggered by multi-sensory information. Previous electrophysiological studies suggest that brain oscillations are sensitive to different hierarchical complexity levels of the input, making them a plausible neural substrate for speech parsing. Here, we investigated the functional role of brain oscillations during concurrent speech segmentation and meaning acquisition in sixty 9-year-old children. We collected EEG data during an audio-visual statistical learning task during which children were exposed to a learning condition with consistent word-picture associations and a random condition with inconsistent word-picture associations before being tested on their ability to recall words and word-picture associations. We capitalized on the brain dynamics to align neural activity to the same rate as an external rhythmic stimulus to explore modulations of neural synchronization and phase synchronization between electrodes during multi-sensory word learning. Results showed enhanced power at both word- and syllabic-rate and increased EEG phase synchronization between frontal and occipital regions in the learning compared to the random condition. These findings suggest that multi-sensory cueing and attentional mechanisms play an essential role in children’s successful word learning.

Human behaviors from toolmaking to language are thought to rely on a uniquely evolved capacity for hierarchical action sequencing. Testing this idea will require objective, generalizable methods for measuring the structural complexity of real-world behavior. Here we present a data-driven approach for extracting action grammars from basic ethograms, exemplified with respect to the evolutionarily relevant behavior of stone toolmaking. We analyzed sequences from the experimental replication of ~ 2.5 Mya Oldowan vs. ~ 0.5 Mya Acheulean tools, finding that, while using the same “alphabet” of elementary actions, Acheulean sequences are quantifiably more complex and Oldowan grammars are a subset of Acheulean grammars. We illustrate the utility of our complexity measures by re-analyzing data from an fMRI study of stone toolmaking to identify brain responses to structural complexity. Beyond specific implications regarding the co-evolution of language and technology, this exercise illustrates the general applicability of our method to investigate naturalistic human behavior and cognition. 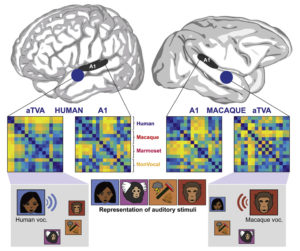 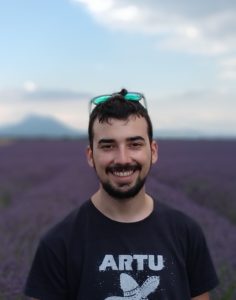 Víctor López-Madrona was awarded a 2021 ILCB post doc fellow grant to conduct a project at the INS to study the electrophysiological dynamics of the auditory cortex during speech perception. As a former engineer, Víctor is specialized on signal analysis and brain connectivity. He did his PhD at the Neuroscience Institute in Alicante, Spain, where he studied the synchronization between hippocampal rhythms during memory processes. Thanks to advanced signal processing methods, he was able to separate multiple theta generators in the rat hippocampus that were modulated during behavioural tasks. Then, he moved to the INS, where he has been doing a post-doc using the same methodologies in simultaneous EEG and MEG recordings during different cognitive tasks. For his ILCB project, Víctor will combine his experience in data analysis to do a fine characterization of the different substructures in the auditory cortex. Moreover, thanks to the collaboration with several ILCB labs (INT, I2M and LPC), he will investigate how the electrophysiological rhythms are associated with bottom-up and top-down processes during speech perception.

This year 140 students from all over the world (France, Italy, Russia, Mexico, Taiwan…) gathered at CIRM on the Luminy Campus for the 4th ILCB summer school. They were offered a variety of introductory and advanced courses that reflect the expertise of our Institute, including Language and Cognition, Neuroscience, Statistics and Machine Learning, etc. Students also realized how much fun science can be! The keynote by cognitive neuroscientist Prof. Sophie Scott’s on how and why people laugh was intriguing, inspiring, and… irresistible! Socializing on campus or at the Calanques National Park next door topped a wonderful week to refresh or reinforce our knowledge and know-how about language, communication, and the brain. 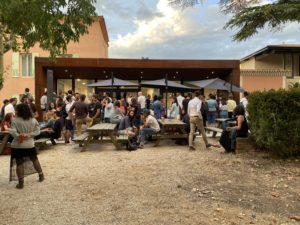 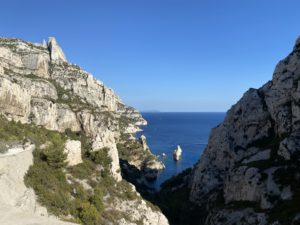 The students come from a variety of academic backgrounds: 6 in linguistics, 8 in psychology, 3 in mathematics, 2 in informatics, etc. Nineteen of them are joining AMU on this occasion.

The MasCo is supervised by Brice Isableu and Bruno Torresani. The two tracks are supervised by, respectively, Marieke Longcamp and James German, and by Laurence Casini and Marlene Abadie. The smooth coordination is by Marien Gouyon.

Longitudinal non-human primate neuroimaging has the potential to greatly enhance our understanding of primate brain structure and function. Here we describe its specific strengths, compared to both cross-sectional non-human primate neuroimaging and longitudinal human neuroimaging, but also its associated challenges. We elaborate on factors guiding the use of different analytical tools, subject-specific versus age-specific templates for analyses, and issues related to statistical power.